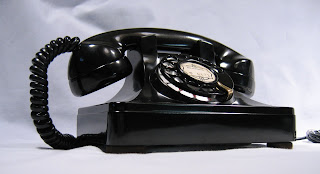 I have had the same phone number for eight years now.  I got it back when I got my first cell phone.  For the first month or so after I got it, I would receive a call every afternoon from a number I did not recognize.

I would answer it, and an old woman would quaver, “Amy?”
“This isn’t Amy,” I would say politely.  “I’m sorry, you have the wrong number.”
Mumbling an apology, the old woman would usually just hang up.  I wondered if she was senile, if she’d had a stroke, if she was medicated—or maybe she was just drunk.  Her speech was always very slurred, even at three in the afternoon.  Perhaps she was hard of hearing as well, because sometimes when I would tell her she had the wrong number, she would again inquire, “Amy?”
“Ma’am, you have the wrong number.”
“Amy?  When you comin’ over?”
“This isn’t Amy.”
“Can you go by the store?  Where’s Joe?”
“I don’t know who Joe is.”
There would be a pause.  “Is this Amy?”
“No.”
“Oh.”
Every day for about four weeks.  Maybe more.  Then the calls tapered off.  Then they stopped altogether.  Years went by and I more or less forgot about the old woman who somewhere, somehow, had my number.  Perhaps she had it written down.  I pictured one of those old-fashioned books that my mother and grandmothers used to use, back when men carried little black books, a record of their conquests.  For the longest time, my grandmother had one with a crimson, faux-leather cover, embossed in gold with the words, Address Book.  She kept it right next to her black rotary phone, heavy enough to cave a person’s skull in, sitting on top copies of both the white and yellow pages.  My mother had one, too, a cheery, canary-colored binder.  The day after every Christmas, she would hand it to me when I sat down to write thank-you letters so I could look up the addresses of prodigal relatives: a great-aunt in Florida, an uncle in Louisiana, another aunt who lived in Lake Lotawana.  That book predated me by a number of years.  Deceased relatives were crossed out, as were friends who'd fallen out of touch.  There were phone numbers still listed with archaic combinations of numbers and letters, all recorded in my left-handed mother's distinctive but lovely cursive.
Or perhaps the old woman had simply retained the number somehow, a bit of cognitive flotsam clinging tenaciously to the chambers of her brain, Alzheimer's rendering it porous and brittle as a dry sponge.  Perhaps memories long-gone from her mind still lived in her fingers when she dialed the phone, along with the name etched on her lips, Amy.  Who is Amy? I wondered.  An estranged daughter, a granddaughter, a childhood friend?  Is Amy living or dead?
These questions have crossed my mind more than a couple of times.  As the months and years have gone on, I began to wonder if the old woman, the woman who was looking for Amy, had passed away.
Then, two weeks ago, she called me again.
I had forgotten the number, but somehow, I had the feeling when I answered it that it would be her, even though it was on a Friday evening and not her usual afternoon fugue-and-dial.
“Amy?”
In a weird way, it was like hearing from an old friend.  “I’m sorry,” I told her almost affectionately.  “You have the wrong number.”
“Oh.”
Yesterday, she called and woke me at 8 a.m.
“Amy?”
It was my turn to slur words.  “Wrong number,” I mumbled and hit the end button.
Almost immediately, she called back.
“Hello?” I responded patiently.
“Is this—?”  Slowly, she recited my phone number, pausing significantly between each digit.
“Yes, it is.”
“But this isn’t Amy,” she said sadly.
“No,” I agreed tiredly.  “It’s not.”
“Okay.  Thank you.”
I lay in bed for a moment, my phone resting on my chest.  Then I quickly Googled the woman’s phone number, half-expecting to see that it was the number for a nursing home.  I was surprised to see that it was a residence, in a neighborhood not so far from my own, and the woman who lived there was named Marjorie.
I dialed the number.
Marjorie answered, “Hello?”
“Hi,” I said.  “It’s Amy.”

Enjoy this short story? Please take a moment to let me know in the comments. In the meantime, check out other short stories here.
Posted by Lauren Scharhag at 9:58 AM