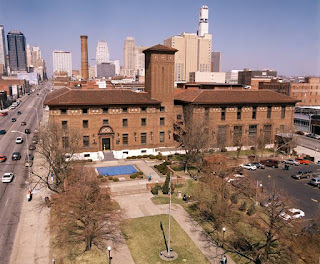 I was saddened to hear recently that the Kansas City Star building at 1729 Grand is up for sale. That historic building is where the Star’s founder, William Rockhill Nelson, once had his office; the site where Ernest Hemingway once worked as a young reporter.

My childhood was colored by newspapers. My earliest memories of Sunday mornings involve spreading the comics on the kitchen table, helping my mother clip and sort coupons. As I grew older, my interests expanded: the crossword puzzle, Dear Abby, the op-ed section, film and book reviews, local events, political cartoons. Eventually, I got around to the front page headlines. During the summers, when I spent most of my time at my grandparents’ house, I would accompany my grandfather to the convenience store to pick up a paper every day before breakfast.

By the time I was ten, I loved being the first one up in the morning because it meant running out to the driveway to grab the paper, so I didn’t have to wait for anybody else to read it.

When I was thirteen, the Star posted an article announcing their launch of Teen Star, a section that was to be written by and for teens. There was an all-call for young writers and photographers, with a number for the newly-appointed Teen Star editor, Bill Norton. I immediately called up Bill and after a brief interview, I was hired. We agreed that my best friend at the time and I would start out by writing a series of TV reviews. (Even then, I was a collaborator.)

A week or so later, my friend and I went to the building at 1729 Grand and met Bill in person. He gave us a tour of the facility. The printing press was still housed there in those days. We got to see the open floor where the reporters had their desks. A professional photographer snapped headshots for our bylines. At thirteen, Bill told me, I was the youngest regular contributor to the Star. I don’t know if I still hold that record or not, but it’s an honor I’ve never forgotten.

My friend and I wrote a handful of TV reviews: Grace Under Fire, The X-Files, Home Improvement, a few others. We even got paid. I don’t remember the exact amount, $25 or $30 an article. It seemed like a fortune to my thirteen-year-old self—getting to do something I loved, and getting paid for it? Was this real life? I was rich! And famous! Word quickly got around at school that my friend and I were writing for the Star. When our first article came out, classmates asked for autographs. Fellow TV fans sent us letters telling us why they agreed or disagreed with our assessment of their favorite shows.

After a few months, my friend lost interest, but I kept going. Throughout high school, I wrote a humor column, fancying myself Erma Bombeck for the letter jacket set. I clipped and saved most of those articles in a scrapbook (which I would share here, but they’re in a box in my parent’s house back in KC).

Recently, I watched the film Spotlight, which was a heady reminder of just how crucial journalism is—not just to democracy, but to our society as a whole. Good journalism, I mean, reporting with integrity, not whatever some random guy on the Internet happens to be spewing at any given moment.
I know, I know. Journalistic ideals are just that—ideals. Some people took their work very seriously, abiding by ethical guidelines and a standard of quality—some people still do. Some people never did. Ever since the beginning of the press, there have been people with agendas to push, or people who are just plain greedy, willing to do whatever it takes to sell more papers. “You supply the war, I’ll supply the headlines,” the yellow press, muckraking, tabloids. There’s no such thing as a perfect system.

Being at the end of an era is always a strange thing. Print media is dying. With the constant demand for online content, quality is sacrificed, as is veracity. And people don’t clip coupons with their moms anymore. Instead of stepping outside every morning to pick up the paper that someone delivered, I roll over in bed and turn on my phone to see the headlines.

Posted by Lauren Scharhag at 12:08 PM No comments: