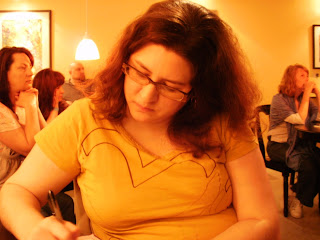 I'm a German-Mexican half-breed from Kansas City, MO, and an alleged perpetrator of drive-by poetry. I'm an ambivert, an intellectual daredevil, a migraineur, a Tarot card reader, a walking sweet tooth, an incurable night owl, and an ardent hallucinator. Besides writing, my skill list is short: taking photos of food, collecting scars and odd maladies, binge-watching entire TV series in a single weekend, curating a mean Pinterest board, juggling, and an endless capacity for retaining pop cultural ephemera. It took me thirteen years to earn my bachelor's degree. It may take me another thirteen to recover. Until then, I closely follow the lives of my imaginary friends and have been known to hang out in prisons or embark on art pilgrimages.

I have been the featured poet in such venues as Loud Zoo Magazine, Two Lungs Publication's International Women's Day Edition, the Uptown Arts Bar Blue Monday event, (sponsored by the Kansas City Writers Place), the Woman Made Gallery Literary Series (Chicago), and the Speakeasy at Swordfish Tom's (Kansas City). My work has been The Broke Bohemian's editor's choice and included in the following Best Of editions: Referential, Isacoustic, Schlock! and Voice of Eve. I am the recipient of the Seamus Burns Creative Writing Prize, the Door is a Jar Poetry Award, the Gerard Manley Hopkins Award, a fellowship from Rockhurst University for fiction, and two Best of the Net nominations. Additionally, I have had work accepted for the 2021 Antarctic Poetry Exhibition.