I am very pleased to be a part of the blog tour for One More Day, a new anthology featuring seven tales, including "Stage Fright," by Erika Beebe, a fellow Rockhurst alumna and a very good friend of mine.


As part of the blog tour, I received an advance copy.  This was a highly enjoyable collection of stories which represent the full spectrum of speculative fiction: paranormal, paranormal romance, high fantasy, science-fiction, fairy tale and horror.  The stories share two common threads: one is that each story is told from the point of view of a teenage protagonist.  The other is that each of the main characters experiences a moment in which they look around to find that the world around them has stopped-- that time has stopped.  The how and the why, of course, vary widely from author to author.  The apocalypse, time machines, computer programmers-in-training, an absent-minded scribe, and a memorable retelling of Sleeping Beauty are but a few of the takes offered up by this talented group of authors.

Erika’s story, “Stage Fright,” (excerpted below), is the story of a small-town girl, Hannah, who has moved with her mother to the big city after the death of her father in Iraq.  Hannah is trying desperately to fit in.  She’s been cast in the lead of the musical her school is putting on, which you’d think would be a leg up with the popular girls.  But no.  If anything, it has drawn the ire of the head Mean Girl.  So one day, during a particularly stressful rehearsal, Hannah suddenly finds everyone frozen in place—everyone except her, and a mysterious boy straight out of the spreads in her teenage heartthrob magazines.  Has Hannah suffered a serious break from reality?  Or is there something fantastical at work here?

I really appreciated Erika’s story in that, unlike a lot of paranormal fantasy/romances, it actually uses the genre as a vehicle to confront greater teenage issues, like dealing with the death of a parent, the struggles of the high school social order, and the pressure to succeed.

“Stage Fright,” like all of the stories included in this volume, is refreshingly well-written.  Usually, when I come across a collection of stories, I invariably skip one or two that don’t hold my attention.  That was not the case with One More Day.  I found each story thoroughly engaging and entertaining.  While the plots themselves aren’t exactly original, I think they will serve as a fine entrée for the YA audience into the greater possibilities offered by the genre—possibilities beyond vampires, werewolves and tedious love triangles.  To that audience, I’m sure, these stories will seem very new (assuming that many tweens today haven’t seen old sci-fi shows that thoroughly mined the stop-time conceit like The Twilight Zone).  My only real complaint, in fact, is that I feel like these tales sort of burst at the seams—the authors have stories that shouldn’t be limited to a short story word count, but need room to sprawl and breathe.  I was left wanting more.  And that’s hardly a complaint.
Aside from “Stage Fright,” my favorite stories of the bunch were L.S. Murphy’s “The 13th Month,” an exciting take on end-times and battles between angelic beings, Kimberly Kay’s “Sleepless Beauty,” a hilarious version of the old tale about the chick who pricks her finger, and Danielle E. Shipley’s “A Morrow More,” which definitely needs to be a book.  I look forward to checking out full-length works by these authors. 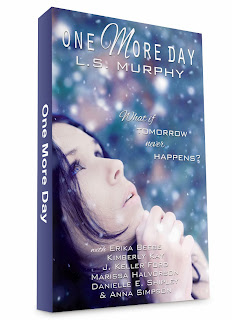 What if today never ends?  What if everything about life—everything anyone hoped to be, to do, to experience—never happens?  Whether sitting in a chair, driving down the road, in surgery, jumping off a cliff or flying ... that's where you’d be ... forever.

In One More Day, Erika Beebe, Marissa Halvorson, Kimberly Kay, J. Keller Ford, Danielle E. Shipley and Anna Simpson join L.S. Murphy to give us their twists, surprising us with answers to two big questions, all from the perspective of characters under the age of eighteen.

How do we restart time?  How do we make everything go back to normal?  The answers, in whatever the world—human, alien, medieval, fantasy or fairytale—could, maybe, happen today.  Right now.

What would you do if this happened ... to you?

Excerpt from “Stage Fright” by Erika Beebe in ONE MORE DAY!


They warned me about the stage. It stretched out long, black and ice-hard with a curve around the edge, and Mean Girl, one of the cast members, stood at the perfect angle, a little behind me off to the left, but where I couldn’t escape her sneer.

"Do you remember the last time you danced on the lake, right before the blizzard in the spring?” my best friend Jess had asked the night before, in a long overdue FaceTime chat—the closest we’d come to seeing each other in months. “Feel the ice, and dance.”

I sucked in a huge breath of air and pictured that day in my hometown, instead of the stage; the sky overhead had darkened, the rolling clouds pushed by a wind so strong, it whipped my long dark hair around my face. I remembered braiding my hair quickly and pulling my green stocking hat down over my ears and forehead. After grabbing my skates, I’d slung them over my shoulder and walked to the edge of the frozen lake.

I can do this. 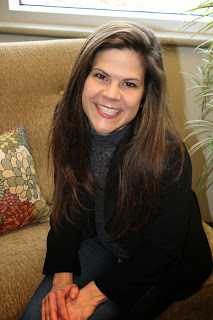 Inspired by her first grade teacher's belief in her imagination from the first story she ever wrote, Erika has been a storyteller ever since. A dreamer and an experiencer, she envisions the possibilities in life and writes to bring hope when sometimes the moment doesn’t always feel that way.

Working in the field of public relations and communications for more than ten years, she has always been involved with writing, editing, and engaging others in public speaking.

Her two young children help keep her creativity alive and the feeling of play in the forefront of her mind.

Posted by Lauren Scharhag at 6:00 AM 2 comments: