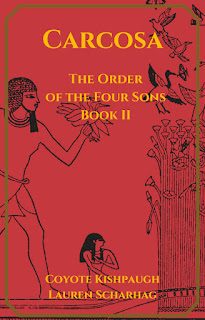 “It lacks the predictability of many fantasy novels and keeps you on the edge of your seat. The authors reveal just enough to tantalize you with the promise of coming secrets to be revealed. It weaves in history and fantasy with creations of new worlds and new views on our own. I can't wait to read more.” –Amazon reader

“A great sequel to what is becoming one of my favorite series.” –Goodreaders reader

“I thought I really liked the first book of this series, but I liked this book even more. The characters now were like old friends and, as with Book 1, I had a really hard time putting this down . . . It had just as much action and adventure as the first book, which was really exciting.”  -Smashwords reader

They’d left their meks hitched out front of Brother Nicodemus’ place. The meks also seemed eager to go, ticking and reaching out to them with their snouts. The team saddled up and rode back through town, passing first the school, then the chapel.


She tugged hard on the reins, turning her mek around towards the building. It plainly did not want to turn in that direction and made a soft keening sound.


“There’s something in there.”


JD and Murphy steered their own meks around, drawing their guns.


“What do you think it is?” Murphy asked.


“Something...not good,” Kate drew her wand. “And the whole town’s in there with it.”


Murphy chambered a round.


“Yes, good evening indeed. It is a fine and blessed evening He has seen fit to give us this day. I’ve been blessed to live in Hormiga all my life, as have we all. And never have I seen a sunset without thinking of His blessings. And even now, I look out at the faces before me, and I wonder and marvel at His works.


“From the young couples I see together, to the children they have brought into His light, we all see every sunrise in His glory. Because before the sunset – and each sun, no matter when it rises on a given day, must set – there is the day. His day. And after His day is the setting of the suns, and the world rests again. And in that peace, at last, we are with Him. In that peace, at last, we can know the full reaches of His joy.


At that, the Reverend held out his arms.


The children came forward in their white robes, their little faces shining and eager. The congregation sighed and exclaimed over their preciousness.
And the faithful began to sing.


With one well-placed kick, the chapel doors burst open. JD swept left, Murphy swept right. Then stopped.
“Where the hell is everybody?” Murphy asked.
Kate peered in cautiously. The feeling had become stronger as they’d reached the doors, something pushing at her mind, trying to get in, the way the Cobar had.
The chapel was a single, large, nearly bare room. Half a dozen rows of long, wooden benches for pews with an aisle down the middle. A slightly raised platform in front for the Reverend, with a wooden lectern. The windows were simple, with white wooden panes, through which they could see the failing light as dusk approached. The walls were whitewashed, devoid of ornamentation except for empty hooks where, presumably, lamps could be hung. There were no candles, no bells, no books, no tapestries—no trappings of religion of any sort that they were familiar with.
They looked around uncertainly.
“Where’d they go?” Murphy asked.
“Look,” Kate pointed.
In the center of the aisle at the front of the chapel, before the lectern, was a circle of rough stones about a foot off the ground.
“What the hell is that, a well?” JD asked.
“Shhh,” Kate shushed him. “Listen.”
Coming up from the stone throat of the well and through the floorboards beneath them was the mixed voices of the town, uplifted in song.
He tames the things that howl in darkness
We grow our crops on what He gives
We know the love that He can show us
We know we’re loved because He lives
Because He lives


The three of them looked at each other, wide-eyed.
“We have to go down there,” Kate whispered. “There’s something down there with them.”
“They sure don’t sound like they need rescuin’, Katie,” JD whispered back. “You sure about this?”
Her face was very white, but she raised her wand. “I’m going down there. You can stay if you want.”
“Wait—”
A man and woman can be married
Their love can be a fire within
But that is nothing when compared to
The joy we know because He lives
Because He lives


As it turned out, the well had crude rungs carved into the sides. The singing grew louder as Kate climbed down. The pressing against her mind grew stronger, she could feel it trying vainly to reach her.


He knows our needs, we are His children
He heals us of all fear and sin
He keeps us safe, He is our armor
We know His love because He lives
Because He lives


Her feet touched the stone floor at the bottom. JD was still about three yards above her.
At the top of the well shaft, Murphy peered down dubiously. “Uh, guys?”
“Just stay there and keep watch,” JD said to him. Then he looked down and shook his head. “Katie, girl. God dammit...”
Before Kate was a stone archway. As she cautiously passed through it, her eyes grew wider still. Beyond it was a wide stone chamber, supported by low arches. The lanterns had been hung along the walls, illuminating the room in a yellow glow. The congregation stood with their backs to her, swaying in time to the song, holding hands. At the front, she saw a group of children in white, gathered around the Reverend.


And behind the Reverend, nestled in its own semi-circular chamber, with stairs leading up to it, was the object of their adoration.


Sometime long ago, a small thing had crawled into Hormiga from the wastes. It was little, maybe the size of a sand puppy. And the boy who found it caught it in a wooden box and kept it as a pet for a while, feeding it little bits of meat and watching it grow.
And he loved it. He loved his little Beast.
His name was Zane Taggart.
After a while, his folks found him watching it in its box. And though they knew they should destroy it -- Nathan would be furious -- they didn’t. They loved their son too much.
And they loved their little Beast too much.
The Beast grew on the meat they gave it. And others could feel the love that came from it. Neighbors came over to see it, to watch it eat, and to be loved.
Eventually, the Beast got big enough that Nathan could sense it. Funny that he couldn’t before, but sometimes a thing from the gates could get kinda sly. But by that time, it wasn’t in a house any more. The townspeople had gone down into the dried-up well in the town square and widened the cavern under it, turned it into temple. And the Beast lived there. Pulsing, shapeless, and loving them.
The boy had become a man and his pet had become the town’s god. His father’s health had been failing him -- he was an old man by then -- and Mama hadn’t wanted to be without him, so they’d both gone down below, to be one with the Beast. Zane Taggart was so moved by the sight that he wept, and wrote a hymn to the Beast shortly thereafter.
Zane tore down his house and built a church around the well. For these many years, he’d held services there whenever it felt like a week had gone by. But the temple below was a holy place, only visited on holidays, or when the sacrament was made-- like a pig or a goat, or a baby the Beast marked at birth as His own, for there is no red silt in this most holy town of Hormiga.
Or, of course, when someone feels the call-- usually the very old or the very young. Then, if there’s been time to gather the faithful, all gather around to watch their loved one go to the Beast.
Below the chapel, in a chamber off to the side, is the Beast, the mouths of all who have given the sacrament working, always working...singing Him hymns, no doubt. Some of them have been there for a long time. The Taggarts’ faces are almost gone, all traces of madness and horror at their torment nearly gone with them.
Nathan had considered killing the Beast as soon as he knew about it, of course. But that would’ve meant killing the whole town, and then the other towns would have panicked and tried to take him, and then everybody would have died but him. And besides, though he’d been immune to its powers so far, he was not so stupid as to wander into its cave to see for sure. And how impressed is a mek-sized (or even larger, by now) mass of slimy flesh going to be by a revolver?
So instead, figuring it would come out eventually, he set by a few toys he’s managed to dig up over the years for the Beast that dwells below. After all, Carcosa had had bigger machines once. He had a cannon with some ammunition and a belt-fed gun to soften it up, and some black powder explosive to finish it off. Then he’d spread oil through the town and burn it down, just to be sure.
And the other towns would understand that’s what happens when you count on something other than Nathan DePriest to save you.


Kate stared.
It was hideous. Easily ten feet across at its base, it was a shapeless, quivering, grayish-pink, like a massive beached jellyfish. But it had no tentacles that she could see...no eyes...no face of its own. It was just an amorphous, pulsing blob.
Then her eyes finished adjusting to the dim light of the lanterns, and she saw that it was not the thing before her that was moving...it was the shapes within it.
There were faces inside of it, mouths working, eyes open. Now and then they would blink. Mostly faces, but on one side, she was sure, she could make out a vaguely humanoid form, though it looked as if it had been partially dissolved away. One of the faces was scarcely touched by the monster’s erosion. Pressed up against the skin of the beast, tiny hands pushing to either side. Mouth working silently, eyes wide...

Back to series overview.