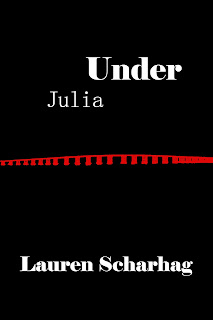 Coming September 1 to Amazon and Smashwords.

Excerpt of Under Julia by Lauren Scharhag:

There is no time here, hence, I am unable to tell you without any hope or degree of accuracy how long it has been that I have sojourned in this strange country—Under Julia (sub Julia), cement-ribbed country, Jonas in the belly of a girded whale, the cathedral of our despair.  My good friend – my only friend – Win, has mentioned that we remind him of the Lost Boys, and to an extent, I do not disagree.  But Win, I fear, while nimble-minded, does not know the myths, does not know Dante.

But it is childhood itself that is the myth, childhood itself that is the fairy tale.  Childhood is a myth.  Conceived of by repressed hysterical Victorian mothers seeking a purpose in life beyond temperance meetings and Tuesday night sewing circles.  Perhaps if they had hit the old brandy a little harder they would have had a clue.  Conceived, yes, and perpetuated by the growing middle class now seized and intent on the religion of nostalgia, this doting, starry-eyed, worshipful fondness for something they felt they’d lost—something they never had.
CHILDHOOD IS A MYTH.  It bears repeating.  I could scream it from every schoolyard. As an educator, let me assure you, innocence is like true love, a golden calf cast by capitalism.  It sells Winnie-the-Pooh apparel, expensive bassinets, and, later, grossly overpriced sports cars for grossly over-indulged sixteen-years-olds, all hormones and entitlement.  And we’ve gone so far now as to attenuate it to 18, 19, 25, 28.  Where does it end, the doting?
I fear my pedagogy is showing.  Please excuse me.  Pedagogue.  Pederast.  As it’s been said by more interesting and notorious kid-handlers than I, I have only words to play with—words and myself.  Yes, self-abuse is the last bastion of those of us marooned in this parody of Hades, parody of Valhalla, with no hairy barbarians to dismember us, no vulture to pick at our livers.  But I am only half-serious.  I am half-everything these days: half-brained, half-hearted, half-assed, half-dead, half-wit.
I used to fancy myself something of a scholar—an instructor of western civ as well as humanities, if that means anything.  So it is with professional authority (I was but a few publications short of my PhD and might have gone on from humble secondary education to some venerable institution of higher learning like Miami-Dade College) that I pose the following question—when exactly did the western world become so abominably sentimental?  Or if not when – scholars can more or less point to when – I bemoan again those stuffy Victorians with their skirted furniture and hysterical Freudian interludes and white and dark meat; breastless, thighless meat, and claustrophobic yellow wallpaper – a better question is why?  Why did those ridiculous mores cling so tenaciously like burrs to the fabric of otherwise-sensible American society?  American society, who once thought nothing of sending children into the blackened mine shaft or employing small digits in factories, tempting the fearsome dentata of whirling machinery, the fires, the textile lung?  Children once regarded as mini-adults, dressed accordingly, treated accordingly, featured accordingly in art, eight-year-old princesses engaged to middle-aged princes.  Left to their own, they became pickpockets and trick babies.  They are mammals.  They are not a different species, no matter how many laws we erect between them and amorous adults.  They will survive.
Hysteria.  How right the word is.  I suppose there have always been puritanical pockets in the corpus callosum of the American psyche—hung witches and red scares and yellow perils and now Internet chat sting arrests.  The ultra-conservatives are always harping on marriage as being an institution for the purpose of procreation.  If such is the case, then we can thank recombinant growth hormones for making girls little breed sows younger and younger—is the average age of menstruation onset eight now?  I forget.
But the thing that maddens me most – as much as I am capable these days of being stirred to madness – is that the hand that venerates youth with one hand slaps away its most ardent acolytes with the other.  Witness the various starlets and pop tartlets and pocket divas, gyrating on stages before they’re seventeen, posing nude for photo shoots, wearing the manifestations of a middle-aged man’s moistest dreams of schoolgirl attire.  Who exactly is the target audience for that?  Witness the slim, hipless, hairless covergirls on newstands and runways, baring their collarbones for our delectation, androgynous as castrati, considered over-the-hill at twenty.
You walk into any department store – any department store – and it’s virtually guaranteed: the little girls’ clothing is going to be somewhere right up front, if not right by the front doors themselves.  Little pairs of panties.  Bathing suits.  Mini-skirts for mini skirts (and I the merry mini skirt-chaser).  And I mean for little little girls—not young women.  Eight- and nine-year-olds.  They even make little junior G-strings in naughty fabrics, with frills and tassels like stripper gear.  And I am the sick one?
If we were really interested in protecting sacred youth, we would edify images of mature men and women, and abandon all interest in prepubescent figures, to say nothing of the eating disorders and diet crazes it inspires, and that whole miserable subset of issues.  But I am not the only one obsessed with youth.
That I am in Florida, the land of Ponce de Leon, is an irony that chokes me, as I sit on the edge of these sullied waters, trying to imagine along with him the taste of that unattainable fountain and some distant future phantasm of the city of Augustine.  And how even more delicious -- as delicious as stolen fruit -- that Leon’s city was named for that famed abstainer, famous for stuffing the poor unsuspecting world with the notion of original sin and hot, sticky guilt?

But it is nothing, nothing.  I am nothing.  Here are heat waves and exhaust and cannabis smoke, no redeeming feature to these pipe dreams.  But thank God, no mirrors.  The horror of age.  I cannot help but think that my punishment is right out of a Greek tragedy—stuck in this nether world, unable to recognize myself as if stricken with a highly selective amnesia, or wrapped in a sly magical Olympian cloak that has forever curtained off past and future, so that I am always and ever—here.

The hazy orchards of dawn germinate far from this place.  Far, and yet that pale peach wakes me each morning, and I feel afresh the possibility of young, bare-armed goddesses with their hair in plaits, and my hands automatically grope for the dime-bag, and my shaking fingers weave from stale buds the approximation of relief.  Wake and bake, as my former students used to call it.
As if the reefer weren’t enough, it seems that all of my old carnal appetites have been re-channeled into prandial ones, and my waistline will attest.  Every blessed morning I wander away.  I begin my ascent into the world above, searching for the heartiest, most sinful breakfast I can procure.  I found a Haitian vendor that sells the most delicious beignets.  I get three with rich dipping creams and eat them on the bus on my way to work, brushing the powdered sugar from my ridiculous polo.

Add to my list of humiliations (perhaps that old buzzard is pecking at my vitals after all) is the donning of uniforms and nametags, my girth swathed in black polyester, my name, R A Y.  A Ray of what, king of what?

The copier store is like fish tank, jutting out on the edge of a strip mall, its slightly blue-tinted glass making passerby look ghostly and distorted, Elysian shades, but with no lightning bolts or reeds.  At least the door is perfectly transparent.  An automatic bell chimes as I enter.  My footfalls leave no sound on the black rubber floor.  Gone are the days of regular bells hung in doorways, noise to frighten evil spirits.
The door is always unlocked as it is a twenty-four operation.  Of course, the night shift and Diana are verboten to me, so I arrive at 7:30 and take up my post.

The days are interminable, but the nights are more so.  I stand at the counter, praying for stampedes of people demanding copies by the ream, hundreds and hundreds of color bound copies, faxes, photos, the full spectrum of services.  And yet, as I stand, my head still full of good THC and pharmaceuticals bubbling in my veins like champagne, like nitrogen in the body of a rapidly-emerging deep-sea diver, there is an odd, blue-lit serenity.  For most people, the nights are a mind-race between sleep and the list of things left undone.  For me, the days are just the unfurling of things that will never be.  I have developed exquisite tunnel vision, trying to maneuver the gauntlet of days.  Industrial printers sing the hours, heating ink onto paper.  If I weren’t already high, the scent of the chemicals here would surely do it.
I swim through the Glaucus noise, zen-like in the midst of humming machines, the voices speaking into receivers, the electrical wires strung overhead, fiber optics thrumming in the ground.  I wonder if these motions are the only dance that there is?  What if these steps are supposed to spell something for me, but I am missing the beat?  The printers and copiers with their buttons and lights, unholy choir that hums and buzzes, but somehow reassuring, a modern sound, safe and sanitary, not unlike a hospital.  Or a prison.  Or a school.
I had always known I was an institutional man.  This is just not the type of institution I had in mind.

The only thing that occasionally distracts from my workday reveries are the lovely parents that come bearing SD cards and snakelike USB cables for me to print off pictures of their very photogenic darlings.  I may not be able to get it up anymore, thanks to my post-incarceration cocktail, but that does not prevent me from eyeing with an aesthete’s appraisal their sunny-eyed daughters, dewy from the Disneyworld sun, fresh from cheerleader camp, glistening poolside skin, golden-brown from tanning salon sessions—which their teenagers are not too young to partake in, I might add.  This is Miami, after all, where people stroll with perfect ease bearing their plastic surgery bandages like badges of honor.  And it is—the domain of the privileged.

Their children—perfect teeth from years of meticulous orthodontics, miraculously clear complexions, again, by means of the best dermatology money can buy, (I was not nearly so fortunate as a teenager), eyes that have never known the indignity of horn-rims, only contacts.  Bodies honed to athletic perfection from years of gymnastics and scholastic sports.  Yes, how perfect are the dollies.
But I am not one to begrudge anyone’s tastes.  I check out the boys, too—the market for snapshots of equally coddled lads is just as robust.  And as I run copies for the unsuspecting progenitor, a mere click-and-drag of the mouse moves the precious photos to my hard drive.  (Would that it could only live up to its name!)
Oh, I am quite the entrepreneur!  Service with a smile.  Come back and see us.

The only thing that perks me up more than photographs, of course, are the rare appearances of such youthful beauties themselves, clad in short-shorts and halters, impatiently shifting their weight from one foot to the other, tossing their hair, talking into cell phones, while their mothers discuss paper options for party invitations, enlarged photos of their trip to Morocco, or the like.

Seeing them fills me with wistfulness—but not the sort of wistfulness you might expect, as this brings me, at last, to the object of my undoing.  If you can tolerate my romantic waxings for a moment longer—you’ve indulged me thusfar, you might as well indulge me a little longer – whenever I happen to glimpse a fair young girl, particularly a raven-haired, ivory-skinned little moon, my blood whispers Amelia.


Posted by Lauren Scharhag at 8:59 AM